Eating turkey with a spoon

Forks are something most of us take for granted, but imagine eating your turkey with a spoon instead of a fork this year.

The fork was introduced ten years later by Governor Winthrop of Massachusetts, but it was not brought into popular use until the 18th century. A really hungry person with a knife and a spoon could probably eat almost any meal presented.

Sure glad I had a fork when I ate my Thanksgiving meal! ...from Holistic Touch Therapy and the Wolfchase IWs: Quigley, Brandy, Jolly Boy, and Special Blend Little Bit. Count your blessings and have a wonderful day. 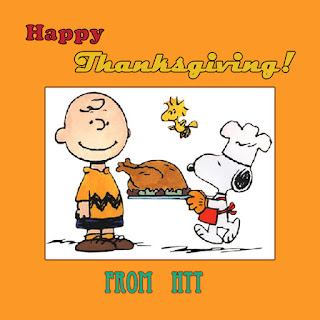 Do you fry your gravy?

Another whacky law. In Redwood, California it is against the law to fry gravy. 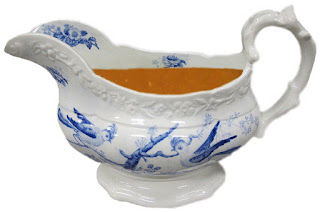 Have a pet-safe Thanksgiving dinner

Thanksgiving is a time for family, friends, fun and usually too much food. Your dog can have a scrumptious Thanksgiving dinner if you choose dishes that are good for him. Protein-rich turkey is great as are sweet potatoes, green beans. Never give your pup onions, garlic, leeks, or scallions as these lead to toxic anemia and avoid grapes and raisins because they can cause kidney failure in dogs. Make Thanksgiving a happy day for your family, friends, and your dog.

Read more about pet-safe Thanksgiving treats for your pet at http://www.holistictouchtherapy.com/articles/have-a-pet-safe-thanksgiving-dinner.html#article 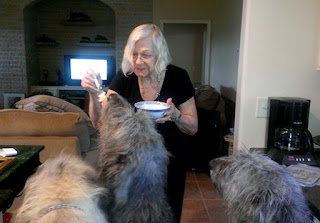 In the fall, stores fill bins with pumpkins in anticipation of Halloween, pumpkin pies for Thanksgiving and the holidays. Pumpkin goodies are yummy and high in vitamin A and fiber, low in fat, and have a number of other surprising health benefits. Plain, unseasoned, cooked fresh pumpkin, or 100% canned pumpkin has the same significant health benefits for pets and doesn't require fancy recipes. Put canned pumpkin on your shopping list and take advantage of the many health benefits it has for your pet.

Read more about how Pumpkin can benefit pets at  http://www.holistictouchtherapy.com/articles/pumpkins-can-benefit-pets.html 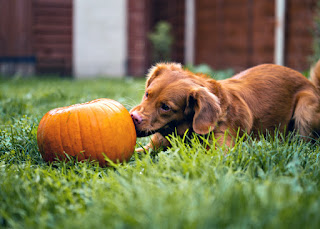 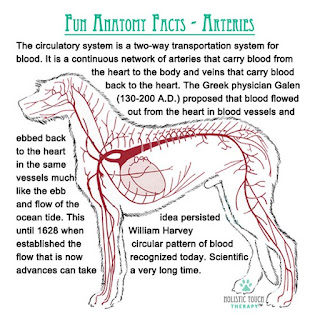 Flash was a fantastic teacher's aide

Flash was a very helpful teacher in Dr. Sue's HTT Pet First Aid & CPR class. Muzzling a live dog can be more challenging than muzzling a stuffy, but Flash was very cooperative. 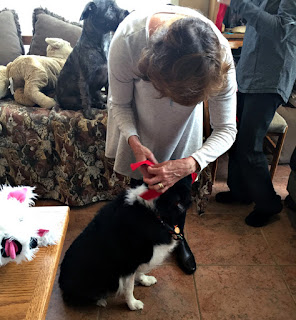 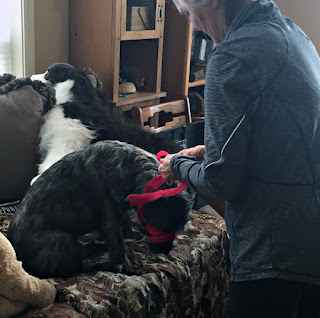 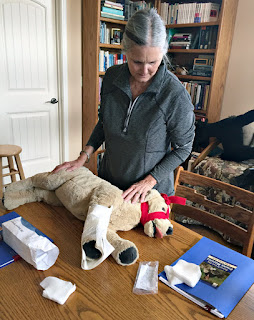 The Blessing of the Animals

Dr. Sue took Little Bit to the Blessing of the Animals to represent the Wolfchase pack. Little Bit was very good and enjoyed meeting the other dogs and people. 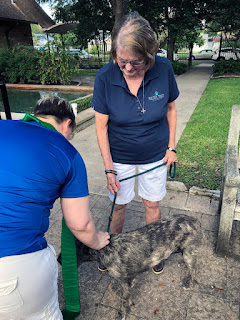 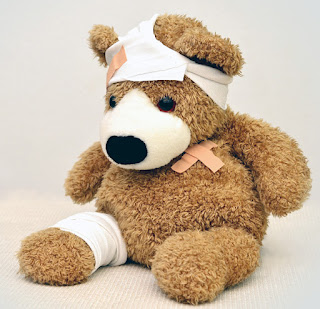 How good is a dog's sense of taste?

Like people, dogs have taste buds that discriminate between sour, bitter, sweet, and salty foods. Taste buds tell a dog or cat if a food is safe to eat. Humans have around 10,000 taste buds while dogs have about 1,700 taste buds and cats have just under 500.

A dog's sense of taste is not very developed. That is why you can feed the same dog food every day, and why they sometimes eat ghastly things like bugs and trash. What is the grossest thing your dog ever ate?

Learn more in my article "How good is a dog's sense of taste?" at http://www.holistictouchtherapy.com/articles/how-good-is-a-dogs-sense-of-taste.html 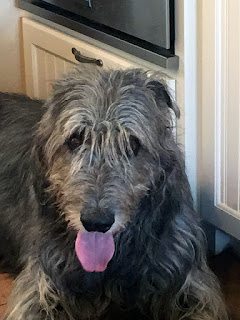 Why dogs wag their tails

A dog's tail originally served to balance him while walking, leaping, and making sharp turns when running. Through time, a wagging tail became a tool of communication. Scientists believe the brain is in charge of the tail. A dog wagging his tail to the right of his rear feels generally positive about something. If he has negative feelings, his tail tends to wag to the left side of his body. Apparently a dog can read the tail talk another dog is speaking.

Dogs still use their tails for balance, but the lopsided swishes of their tails convey many messages to other dogs and to you if you are listening. Learn more about tail language in my article "Why dogs wag their tails" at http://www.holistictouchtherapy.com/articles/why-dogs-wag-their-tails.html 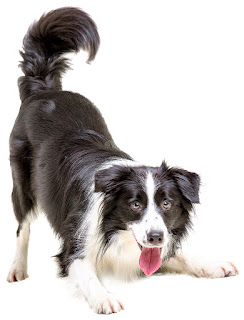